Wolf spiders will jump on their target while hunting prey, but won’t jump high into the air like some other jumping spiders.

Regarded as the sprinters among spiders, wolf spiders are one of the most agile spider species in the world. They chase their targets and pounce on them like wolves, which is how they have gained their name – wolf spiders.

However, even though they’re agile and very athletic, wolf spiders won’t jump onto a human and attack it. It will only jump on other animals when they try to catch it for food.

Wolf spiders pounce rather than jump, though they’re seen as one of the more agile wolf species.

When the wolf spider chases its target, it will pursue it endlessly when the animal goes out of control. But they will prefer to ambush the target and pounce on it, which can save it a lot of hard work.

Thanks to its long legs (that are the same size as the size of its body – around 2.5 cm), the wolf spider is capable of making up a lot of ground if the chase is on.

They’re regarded as one of the fastest spider species, which serves it well if the pounce is unsuccessful and the target somehow manages to escape their ambush. 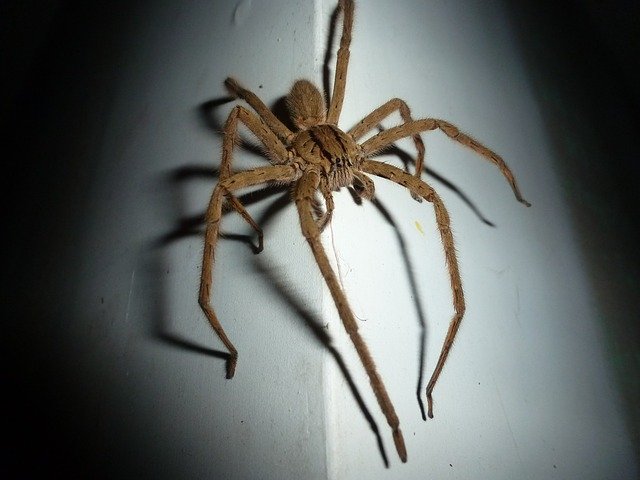 After successfully catching the target, the wolf spider will curl the animal into a ball and then try to consume it whole.

If the target is too big and is not dead yet, it will enter venom into the target to terminate it and then liquify it, so that it can consume it in its entirety. Wolf spiders are exceptional hunters.

Like true predators, wolf spiders will be at their most active at night. During the day, they are likely to hide away in their burrows which they dig with their long and strong front legs. Most of the pouncing, or jumping, will thus be done at night.

Do Wolf Spiders Jump on Humans?

No, wolf spiders don’t jump on humans to attack them.

In fact, wolf spiders (at least wild ones) are quite scared of humans and will only bite them if they’re intimidated or if you come too close to them.

However, when the wolf spider bites, it can lead to uncomfortable symptoms at the site of bite and maybe even some signs of dizziness, but that’s rare.

If you’re allergic to spider bites and a wolf spider bites you, it can get quite uncomfortable. Luckily, that is a rare occurrence.

Also, the effects from a wolf spider bite will not be nearly as bad as the symptoms you’d get from a black widow attack, which is one of the main distinguishing factors between the two.

If you’re worried about wolf spiders jumping on you and pouncing you like prey, then your mind should be calmed – wolf spiders just don’t do that. They’re intimidated by our presence and will usually hide if you come close to them.

However, if you leave them no choice and you try to touch it, then you can expect it to bite you.

Some people have reported their wolf spiders jumping at them. That will only be possible if the spider is kept as a domestic spider, and it will be a gesture of affection rather than a full-fledged attack. You’re not likely to see a wolf spider jumping in normal circumstances in nature, though.

Here’s an example of a domestic wolf spider jumping:

Can Wolf Spiders Jump in the Air?

No, there is no evidence of wolf spiders jumping into the air.

They have long legs that are strong, which allow them to run very quickly. That’s why wolf spiders will prefer to catch their target in a chase if they have no other choice.

Wolf spiders have small hairs on their legs, allowing them to sense the faintest of movements around them, which gives them an important advantage over other animals.

They will wait in their burrows to catch their targets, waiting for them to come close to the burrow so they can pounce on them and consume them. They will use their hairs to detect movement near the burrow, and then take their opportunity when it arises.

So, wolf spiders don’t jump in the air, but there are some other spider species that do that. For instance, jumping spiders can jump 50 times their size into the air, which is truly impressive. Jumping spiders usually have shorter legs and more hair on their legs.

What To Do if a Wolf Spider Jumps on You?

If the wolf spider jumps on you and it’s not your pet, then you should avoid it and if it bites you, you should try to treat the wounded area immediately.

This is very unlikely to happen in nature, though. You should not worry too much about wolf spiders when you go out and about, as they tend to avoid humans if you pass by. It will only jump on you and bite you when you try to pick it up, for example.

If you see a wolf spider in your home and it jumps on you, don’t squish it! It can be a very useful natural line of defense against bugs and insects in your home.

The wolf spider will be quite harmless to you and your family, but it has the ability to catch all the insects in your home such as mosquitoes.

Wolf spiders don’t jump as often as jumping spiders, but they do seem to have some ability to jump, at least when they pounce on their targets. They have long, powerful legs which serve them well when trying to catch other animals, but they won’t use it for jumping.