Black bears are likely to return to the same area daily if they know it is a food source. However, they generally do not stay in the same area if there is no incentive to return. 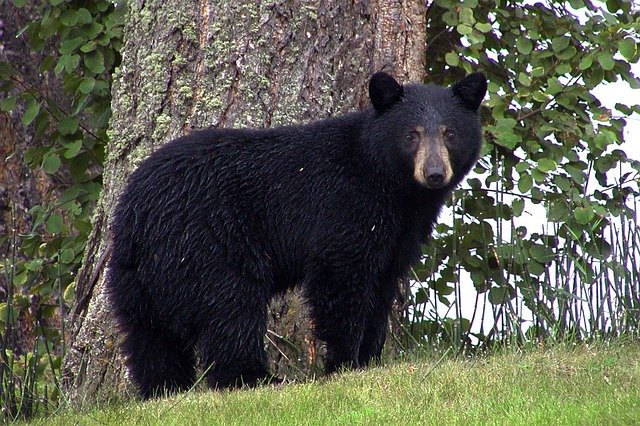 Keep in mind that bears will return to your home or campsite repeatedly if you leave food or trash lying around, so keep your area clear!

They have home ranges that are up to 100 square miles which they will roam around. They will usually roam around their large ranges looking for food and mates if you don’t give them a reason to stay in your area.

Will Black Bears Return to your Backyard?

If you do not remove the things the black bear was interested in in your yard it is very likely they will return. Make sure you remove any food scraps, bird food, small pets or garbage cans.

If you see the black bear in your yard, give it space and ensure your pets and children are nowhere near it. Once the bear has moved along, remove everything the bear was interested in. If you do not immediately do this it is likely the bear will continue to visit your yard.

They have incredible memory and can return to places they know food is years later.

What to Do if a Black Bear has Been in your Yard?

Whilst black bears are not as aggressive than other species of bears, they are still very capable of being dangerous if they feel threatened.

They can pose a significant risk towards pets, children or even cars. But there are several things you can do to deter a black bear from entering or returning to your yard.

Investing in bear proof garbage cans can ensure that the bears do not sniff out your garbage. Black bears commonly will sniff out garbage bins or camping sites and go in the search for food.

By ensuring you keep your trash tied up and kept securely in a bear proof garbage bin you will reduce the risk of finding one of these furry intruders in your yard.

As well as this, generally keep any human food, pet food, scraps or grilling equipment out of the yard and cleaned up. By removing rubbish and food products from your yard the black bears will not sniff it out when foraging.

Bears also love fruits and seeds, so keep bird feeders and fruit trees covered when you go to sleep.

Make sure if you have small pets, like chickens, cats, small dogs or guinea pigs you keep them securely locked up at night to ensure they do not get injured or killed by a black bear. And remember, if you see a black bear in your yard, do not approach it.

Black bears home ranges vary depending on the sex of the bear. A male bear’s home range is usually about 50 square miles, but can be up to 100 square miles which allows them to wander to find a mate.

Occasionally black bears will travel further than their home range, if they cannot find food (especially in Fall) or are threatened by humans.

However, they are excellent at finding food and foraging. If they cannot find food or other resources in their home range, they will wander to find some.

Bears generally spend most of their time foraging for food unless it is breeding season. During breeding season, the bears will pair up and mate, and it is not uncommon to see groups of male bears congregating at a feeding sight and competing for female attention.

Black bears form a social hierarchy when they are together which ensures that there is minimal conflict. Black bears are not known to be aggressive, unless they are threatened, injured or with their cubs. However, they may have fights for mates.

Black bears have been known to return as an adult to places they fed from or were shown by their mother. A black bear is very skilled at finding their way across long distances for food or other resources and remember their geographical locations well.

They easily find their way back to a location they have visited before. This is partly due to their great sense of smell.

Black bears are not as nomadic as polar bears, who spend most of their life wandering around. Whilst brown bears do spend a lot of time foraging and wandering around for food, they generally stick to their home range.

Black bears are not like wolves or other predator animals and are not territorial. They have home ranges which allow them to share space and resources with other bears. They can intermingle with minimal conflict and display limited social behaviour.

They like these locations are there is a lot of food for them to eat. They enjoy plants and animals, and their diet will change depending on the season. They will even forage through garbage for food in their range.

They often travel a long way to search for food, which explains why they do not stick to one small area. In fact, black bears migrate for a short 6 week journey in Fall to find food before hibernation before returning back to their home range.

Black bears are mostly solitary, unless it is mating season. A mother can produce up to four cubs and stays with the cubs for approximately 16 months. During this time the mother bear is very protective, so you should never approach a mother with her cubs.

Why do Black Bears leave their Home Range?

Black bears will leave their home range if they feel threatened or resources run low. Compared to other animals, a male black bear’s home range is very vast, and usually will provide an abundance of food in each season.

The male will travel around their range during breeding season in the search for a female bear.

Male black bears will roam far and wide while females will stay in small areas for their whole lives. A black bear will return to the same location daily for a few weeks if they know there is food there. If you don’t leave food or trash lying around, the bear is likely to roam far and wide around its range in search of food and a mate.