There are currently 66 different spider species recognized in California. Many of these species are found all over the United States, but some of them are also more endemic to California.

It can be interesting to explore what species you might come across in California.

If you’re interested in all the spiders in California, then you will want to read this article. We’ll go over the 16 most common spiders found in California.

Here, we will list the most common spiders in California. Note that in this list, we’ll mainly include the most common species, but we’ll also mention some species that don’t appear that frequently in this state. 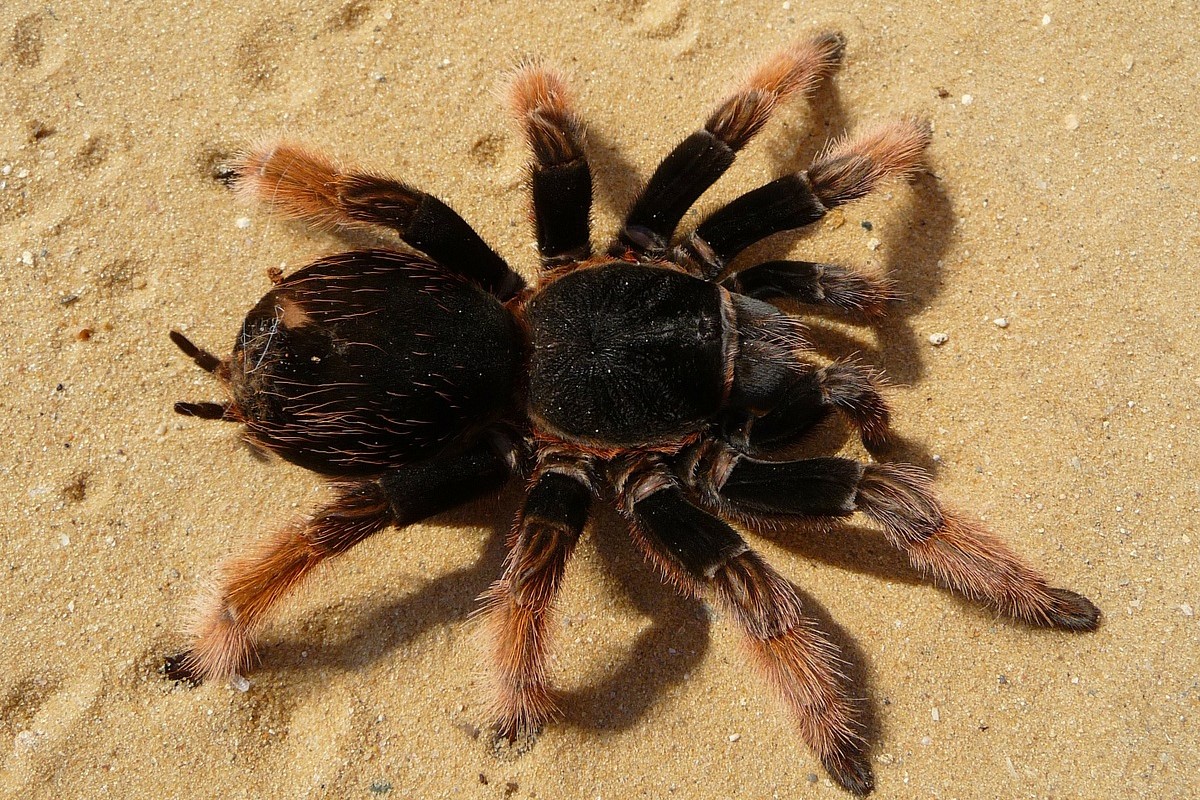 Yes, the tarantula is a common species in California – not just as a pet, but also as a spider living in nature.

The California Tarantula, also known as the Aphonopelma Chalcodes, is the most common tarantula species found in California. It is so typical for this state that it has gotten the name from the state itself.

You’ll also be able to find other tarantula species in this state. For example, the desert blonde tarantula is also sometimes found in this region, but also other southern states like Arizona. This tarantula is all-black and it’s often found underground in burrows and other enclosed areas where it can surprise its prey.

The black widow spider is one of the most feared spider species not only in California but also in the world.

That’s because of its potent venom – but not many deaths have been recorded because of the bite from this spider.

Since 1983, no fatal accidents from the bites of this spider have been recorded in the whole of the United States. So if you’re worried that you might get bitten by this spider, know that it might happen, but it’s not necessarily life-threatening – especially if you receive help quickly.

You will be able to spot this spider by looking at its body and the red patterns on its black body. Males are typically not as black as females and they’re also smaller than females, so you should be able to see the differences there.

Not only the black widow but also the brown widow spider is quite common in California.

This spider species is not known to be as dangerous as the black widow spider, but it also doesn’t have a good reputation with Californians.

The brown widow spider – as the name suggests – will usually be more brown or gray than the black widow, and it will also have three white spots on its back. You won’t be able to find this spider in your home – rather, you’ll be able to see it outdoors in hidden spots.

Cellar spiders are found almost anywhere in the world.

They’re one of the most common spider species around the globe. That’s because they are very adaptable and can survive in almost any setting because they mostly live inside people’s homes.

Cellar spiders will usually hide in corners and cellars of homes, where they will create large webs that they’ll use to hunt down insects.

The distinct features of this spider are its long legs and its small body, which you will not have any problems seeing in your home, especially because this spider likes to hide in corners and on ceilings.

Grass spiders, or Agelenopsis, are another spider species that you might be able to find in California.

Grass spiders will mostly live in greener areas where they have access to insects and bugs they can find in grasslands.

They don’t like open areas, because they will not have many chances to create webs there. Instead, they will create their large, sheet webs between grasses and other plants, which will allow them to hunt insects easily.

Grass spiders are mostly brown with three brighter stripes on their abdomen. You’ll be able to see it inside its web most of the time.

Another common spider species that are present all over the United States is the wolf spider.

This species is known for its hunting skills, and because of its slightly menacing appearance, they also get a bit of a bad reputation sometimes.

However, this reputation is sometimes unjustified since this species is not that dangerous to humans. They’re quite shy and will run away if you see them, but if they have no other choice, they will bite you.

Despite its name, the European Garden Spider is a common spider that is also found in California.

You will probably be able to find a spider of this type in your garden. It’s known for its light-brown body and a bulky abdomen, and its ability to create large-scale orb webs.

This spider will spend most of its time inside its web, waiting for prey to get stuck inside the web. There are also other types of garden spiders in California, such as the yellow garden spider, but the European garden spider is the most common one.

The American house spider (scientific name Parasteatoda tepidariorum) is a tiny cobweb spinning spider that is common throughout the United States.

The male bodies don’t grow more than 5mm long while females can grow to 6mm. Including outstretched legs, they will come to about 1 inch in length.

Female egg sacks contain 150-200 eggs. Once the eggs hatch, you may see many dozens of babies hanging out in the mother’s web. They will move away on their own after a few days.

Common House Spiders are just one of the many species of spider that are regularly mistaken for daddy long legs.

The famous false widow gets its name because of its similar look to the highly venomous black widow spider. It has that characteristic dark globular body that puffs up like it’s full of gooey venom.

And while the false widow is venomous, it’s not nearly as venomous as the black widow and is unlikely to cause death.

It is only recent that false widows have been identified in California. It’s believed they may be an introduced species. They first emerged in residential and urban environments, but are increasingly found in nature as well.

Sowbug killers are also known as woodlouse hunters or cell spiders. Their scientific name is Dysderidae.

They’re a very common spider in many parts of the world, including Europe, Asia, parts of Australia, and North America. They can be found in all states of the USA.

Their bite is venomous but usually only causes localized pain.

The Calisoga spider is also known as the false tarantula. It’s a large, hairy, and dark brown spider commonly found throughout California.

Like tarantulas, Calisoga spiders are predatory ambushing spiders. They nest under rocks and foliage in woodlands, making thin webs that are woven on the forest floor.

They’re more aggressive than tarantulas and will often raise their front legs if approached.

The Trashline Orb Weaver gets its name from the line of “trash” that it weaves into its web. This can be anything from leaf litter to the remains of animals it has eaten.

The line of ‘trash’ is, actually, woven into a straight line through the web, and the spider sits still in the middle of that trash line until its next prey gets caught in the web.

The false wolf spider (scientific name: Zoropsidae) looks, as its name suggests, a lot like a wolf spider. It generally has a grey to brown hue with the same pattern on its back as a wolf spider.

In California, they’re only found in the far southern parts, including San Diego County. As you head further down into Mexico, they’re increasingly common. They’re also found throughout most of South America, Australia, southern Europe, and China.

The Black House Spider is not commonly found in California, but is believed to have a small presence in the state.

The spider comes from Australia and New Zealand, and any presence in the USA would be if the spider had hitch-hiked across the Pacific.

It is a messy web-weaving spider who will weave webs in corners, often on the ground. It’s small yet venomous. The venom is not known to cause too much harm to humans.

Yellow Sac Spiders are very common throughout the USA and Europe. They’re identifiable, as the name suggests, by the fact they are yellow. They also create web sacs, also in line with their name!

Commonly found in trees and shrubs, yellow sac spiders may take refuge in the home as well.

My favorite trivia about this spider is that Mazda had to recall 65,000 cars in 2011 after its webs were found to clog an unusual number of Mazda 6 fuel system ventilation tubes.

They have the scientific name Cheiracanthium inclusum.

The crab spider (scientific name: Thomisidae) is one of the most common spiders all around the world. They’re found everywhere in the world except Greenland.

They’re tiny ambush spiders who will often sit on flower and leaves to catch their prey. They have remarkable color-changing abilities, allowing them to change color to blend in with the flower they are sitting on. However, it can take several days for this color change to occur, requiring a lot of patience from the spider!

There are about 66 different species in California. In this article, we’ve gone through the main species that you might come across in this state.

Some of the most common spiders include the tarantula, wolf spider, grass spider, garden spider, black and brown widow, and other house spiders. You might also find a lot of cellar spiders, which are also called Pholcidae.

I am the founder and owner of Fauna Facts. My mission is to write valuable and entertaining information about animals and pets for my audience. I hope you enjoy the site!

Don’t forget to follow us on our various socials: