Although an adult panda can usually defend itself against predators due to its large size and strength, a panda cub is more likely to be hunted by these cats.

The panda is primarily diurnal. This strategy allows them to avoid predators like the snow leopard which are primarily nocturnal and their biggest predator.

What You Will Learn show
What Eats Pandas?
1. Jackals
2. Snow Leopards
3. Yellow-Throated Martens
Predatory Threats to Pandas
Wild panda population between 1970 and 2020
How do Pandas Protect Themselves from Predators?
1. Climbing
2. Physical Strength
3. Swimming
4. Self-Defence
Do Humans Hunt and Eat Pandas?
Conclusion

Even though pandas give birth to fully developed young they’re still no match for predators with brains and hands, like humans!

Humans are actually one of the pandas’ biggest predators, but we’ll talk about humans later, after we discuss their natural predators.

Jackals have been known to attack pandas when the opportunity arises.

Jackals are medium-sized wild dogs that live in Africa, Asia, and Europe.

They may follow a panda’s trail or lie in wait near trees where pandas eat bamboo leaves and shoot at night.

They then kill their prey by biting into its neck or throat, causing suffocation.

Jackals have been known to chase pandas up trees and wait for them to fall from the branches before killing them and eating them.

They usually hunt at night for prey such as rabbits, snakes, lizards, birds, fish, deer fawns, young pigs, or goats.

However, they have been known to eat insects or plants if needed. Jackals generally do not attack human beings unless they have to protect their den or pups.

Snow leopards are solitary animals that live in the mountains of Central Asia, from southern Russia to the Tibetan plateau, including Mongolia, China, Afghanistan, Pakistan, India, and Nepal.

Because snow leopards live in the same mountainous regions of central China as panda bears, they pose the biggest danger to them since this is the natural habitat for snow leopards.

Snow leopards are also known as the “mountain ghost” in China because of their reclusive nature and ability to blend into snowy environments.

They usually hunt at night, making them difficult for pandas to spot coming upon them from behind.

Snow leopards have been known to take large prey such as blue sheep or Himalayan bharal but they only do so when their usual food supply is scarce.

The yellow-throated marten is a type of weasel found in Asia. These predators usually prey on chickens, pigs, goats, and deer fawns around villages.

Although it’s not common for a yellow-throated marten to attack and eat adult pandas, martens have been seen attacking and eating panda cubs.

These predators usually prey on chickens, pigs, goats, and deer fawns around villages and have been known to attack humans if they feel threatened.

Pandas used to be critically endangered. But their populations are stabilizing thanks to conservation efforts by the Chinese government. However, pandas still face serious threats, including:

Pandas reproduce at a very slow rate, meaning every preventable panda death is a tragedy.

Below, you can see how conservation efforts have helped them come back from the brink: 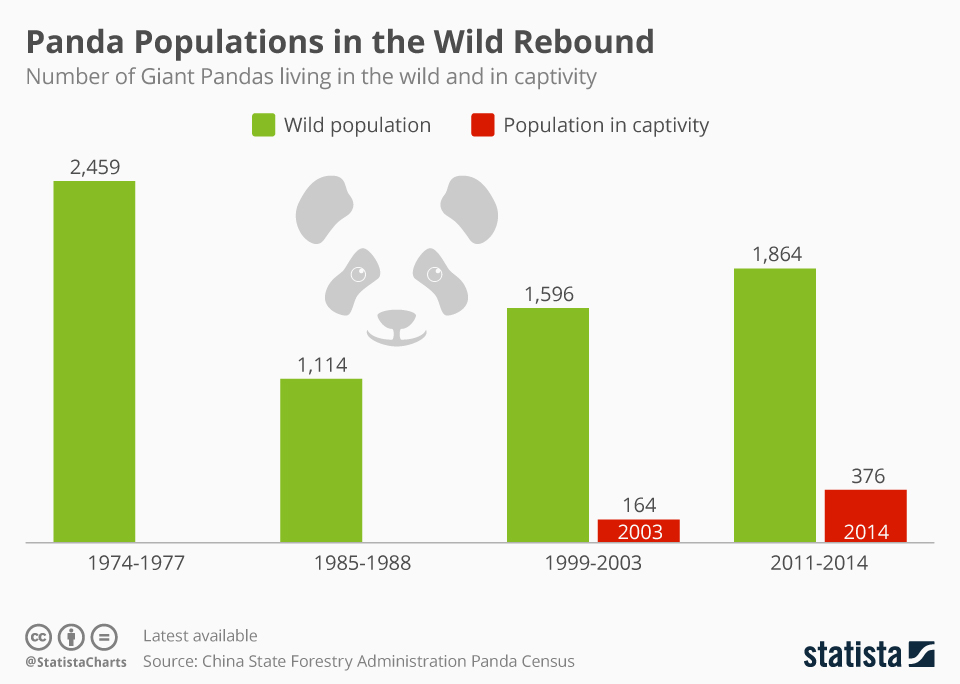 You will find more infographics at Statista

How do Pandas Protect Themselves from Predators?

Pandas can defend themselves against predators like any other bear. This includes by utilizing their physical power as well as strong jaws and teeth.

Although pandas are sedentary and peaceful, they will usually avoid conflict if possible.

If escape is impossible, though, they will certainly defend themselves.

Pandas, like most animals, are instinctively afraid of predators. This fear is an effective defense mechanism that prevents them from being attacked in the first place.

Below are some key ways pandas protect themselves.

Pandas are very good climbers. They often climb trees to feed, escape predators and sleep in the branches.

The panda’s long claws help them grip onto bark so they can pull themselves up high in the tree.

The bones in pandas’ front paws are different than most mammals – they have an extra ‘thumb’ bone! This gives them more strength and grip when they’re climbing.

If they can’t get away from a predator, they use their sharp claws to defend themselves against predators.

Panda bears are known for their strength and their massive size. Pandas have strong jaws with sharp teeth which they use to protect themselves when provoked by predators.

The teeth can inflict severe damage and even break bones during fights.

They also have strong claws, which they thrust into the body of their prey to rip out flesh and organs. Pandas often use these sharp claws to fight off predators.

Giant pandas can escape their enemies is swimming.

Despite weighing around 150 pounds, pandas can effortlessly swim to save themselves from predators.

In addition, pandas have been known to exhibit other defensive measures such as “A tripod stance,” where a panda stands on its hind legs and roars or growls fiercely while staring at the opponent without making physical contact.

Interesting Fact: There have only been 3 reported panda attacks on humans. Source

Do Humans Hunt and Eat Pandas?

Although hunting and eating pandas were once common practices among certain groups of people, these days it is illegal to hunt and smuggle pandas.

Poaching has decreased in recent years as a result of new Chinese legislation and increased public awareness of conservation efforts.

Anybody caught hunting pandas could face jail time of up to 10 years.

Pandas were once widespread throughout southern and eastern China, northern Myanmar, and northern Vietnam.

However, human encroachment into panda territory, combined with severe deforestation in those regions, has reduced panda numbers dramatically over the last few centuries. Fortunately, their population is currently stabilizing.

The panda is a species that has adapted to its environment through natural selection. Unfortunately jackals, snow leopards, and yellow-throated martens prey pandas, which can hurt their population recovery.

Pandas will resort to using their size and strength as a defence against many of their predators but will rather avoid confrontation.

Hi, I’m Garreth. Living in South Africa I’ve had the pleasure of seeing most of these animals up close and personal. When I was younger I always wanted to be a game ranger but unfortunately, life happens and now at least I get to write about them and tell you my experiences.